Introduced by the mid-1950s, the MA-1 became the flight jacket of U.S. Air Force and Navy pilots and ground crew. Designed for use in temperatures of 14-50 degrees F, the MA-1 had a 100% wool knit collar, waistband and cuffs. The MA-1 discarded the mouton fur collar of its predecessor, the B-15, because it interfered with the parachute harness worn by aviators. Other features of the jacket included a tab that the oxygen mask was clipped to, tabs to hold the headset wires in place and the original U.S. Air Force decal. These features were eventually removed from the flight jacket as it was adopted by other branches of the U.S. Armed Forces and equipment for pilots changed. 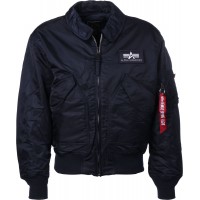 Alpha Industries CWU rep BlueAs the technology of materials and fabrics improved, there was a need f..